For that protector in your family, that may find themselves in harms way during "a bump in the night" . . . finally, all around ballistic protection at an affordable rate has arrived.

Here is a decent explanation of body armor levels:
http://njlawman.com/Feature%20Pieces/Body%20Armor.htm

Simply put, it has been stated that you should use the level of body armor that would stop a round that your would carry in your defense weapon.

For those that protect their home with an AR-15 or a shotgun with slugs . . . you're looking at investing in at least Level III armor plates and a carrier to attach them to.

Is it practical to don an entire interceptor vest (if you could legally procure one) with armor plates for that bump in the night?  Probably not.  It wouldn't be easy to put in less than a second or two.

There is a more common sense solution though.  Voodoo Tactical makes a "High Mobility ICE Plate Carrier" that can be purchased and shipped free from ebay for around $50 depending on the color you choose. 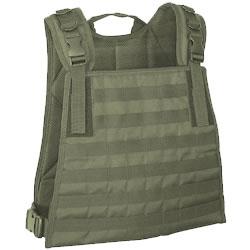 With side release buckles, your family protector can slip into ballistic protection for his or her vital organs with little effort.  Throw a couple magazine pouches on the front and you're good to go for defending your little plot of land from would be thieves, hooligans and wrong-doers.

For instance, we came across a vendor on ebay that sells to law abiding citizens (who are NOT felons - as it is illegal for felons to possess body armor), under the name: Vacextar
http://myworld.ebay.com/vacextar?_trksid=p2047675.l2559

So basically for about $175 you can have a very strong ballistic protective vest for home / self defense.  When that bump in the night happens, you might consider grabbing that "easy to put on" plate carrier that you bought shortly after reading this, that protects your upper thoracic cavity and stacks the odds in your favor.
It's something to think about anyway . . . thanks for reading.
﻿
﻿
Posted by Great Lake Survival at 7:16 PM