Are you serious? Raw milk confiscation . . .

Read this article from Natural News >﻿ 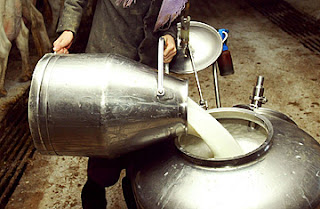 (NaturalNews) In a bombshell revelation of the depth of the food police state that now exists in LA County, California, NaturalNews has learned that the LA County health department has unleashed door-to-door raw milk confiscation teams to threaten and intimidate raw dairy customers into surrendering raw milk products they legally purchased and own.

According to Mark McAfee (see quotes below), both LA County and San Diego county have attempted to acquire customer names and addresses from Organic Pastures (www.OrganicPastures.com) for the sole purpose of sending "food confiscation teams" to customers' homes to remove the raw milk from customers' refrigerators. Using both phone calls and home visits, these teams intimidate customers and try to force them to give up their milk.

These revelations have surfaced in a recorded NaturalNews interview with Mark McAfee, the founder of Organic Pastures and a food rights advocate. Here's what he told us:

"I received a phone call yesterday morning from a wonderful young gal, a 36-year-old mom out of LA County. She's one of our UPS customers that we deliver overnight raw milk to her house. When the CDFA was in here the other day on our recall, they demanded to have all our delivery addresses for overnight UPS delivery. We screwed up and [inadvertently] gave it to them, they got it from one of our secretaries here. The LA County health department started calling her, six or seven times, demanding that she give up her raw milk from her own home to the health department.

She refused, then they showed up at her house and demanded that she give her raw milk to them. She was getting ready to call 911 for the Sheriff's department and have them removed from her front doorstep, and she was threatening to use her camera to take a picture of them and post it on Facebook for harassing her over her raw milk... The investigators left after she told them she was not going to give them the raw milk and to get the Hell off her property.

This is what's going on, it's like food Nazis, it's incredible what these people are doing, trying to collect food from people's houses, that have not made them ill!

Then the San Diego health department called me up and said oh we want a list of all your buyer's club members, and I said no... and they said we want all their addresses and their names, because we want to go to their homes. I said it ain't happening, we aren't going to give it to you."

Are armed raids on raw milk customers next?

Remember: The raw milk from Organic Pastures is legally sold, legally purchased, and greatly enjoyed by its customers. There are virtually no complaints about this product. Customers love it. Only the government wants to confiscate it and destroy it.

And even as the county is unleashing food police to confiscate raw milk that authorities say might be dangerous, they cannot find anyone actually harmed by it. Nor do they pay any attention to the fact that upwards of 70 percent of the fresh chicken meat sold at grocery stores across California is routinely contaminated with salmonella and other pathogens.

What this clearly demonstrates is yet another ratcheting up of the California police state, where county authorities reach right into your refrigerator and confiscate food that they claim might not be safe -- food that you've legally purchased and wish to consume knowing full well that it's fresh and raw!

The question on all our minds is simple: Where does this end? Having already criminalized raw milk distribution at Rawesome Foods, thrown James Stewart in jail (http://www.naturalnews.com/035208_James_Stewart_torture_county_jail.h...) and completely shuttered the Rawesome operation, California's bureaucrats seem to have too much time and money on their hands, so they target real food and local farms while ignoring the truly dangerous criminals running loose across the streets of L.A.

Such is the inevitable result of big government gone bad, which is almost an oxymoron because big government always goes bad. Eventually, the power granted to authorities at any level (county, state, federal) is turned against the People, and food, farms and freedoms are among the first targets to be threatened.

Read NaturalNews for more breaking news on this food police confiscation story. In the mean time, I also recommend reading www.TheCompletePatient.com for timely coverage of this topic, as well as "Raw Milk Freedom Riders" (http://rawmilkfreedomriders.wordpress.com).

- GLSC Team
Posted by Great Lake Survival at 7:02 AM