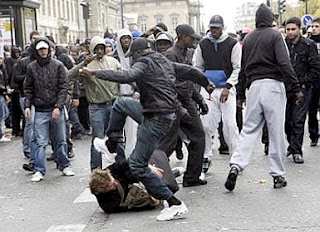 A picture is worth a 1000 words.  What it does not tell us, is "Why is this guy about to get the ever loving gray matter stomped out of his head?", "Why did he happen to be where this angry mob of people were?"

As racial tensions in the US rise, it would be prudent to keep aware of our surroundings and not be where mobs, protests and angry people are.

The story below is yet another story of Black on White violence following the shooting of Trayvon Martin.  What doesn't matter is how any of us feel about the case.  What does matter is that we keep our families safe in uncertain times.

What gets me irritated, is that the man in the story below had an egress, but instead chose to confront the angry mob of 100 people after a rock was thrown at his car.  He had no tactical advantage and was for all intents and purposes lured into an ambush.

Because of that, whether it be pride, ego or any number of other emotions, he and the young lady were beaten and quite honestly, lucky to be alive.

Not always is it bravery to stand your ground and fight.  I would hope if I come across a crowd of angry people, especially motivated toward racial violence, that I would get myself and my family out of harms way as quickly as possible.  It's one thing if I'm by myself and want to go off 'half-cocked', it's quite another thing to go off 'half-cocked' when there are others with me, that would depend on me for their safety and protection.

For those who are not new to the concept of survival and self defense, I'm sure the story below shouts "tactical error!".

I like the quote from Mr. Miyagi: "Best way to avoid punch, no be there."  Which should have been followed with: "And then if that fails, be decisive, brutal and leave as quickly as possible."

By Michelle Washington
The Virginian-Pilot
© May 1, 2012

Wave after wave of young men surged forward to take turns punching and kicking their victim.
The victim's friend, a young woman, tried to pull him back into his car. Attackers came after her, pulling her hair, punching her head and causing a bloody scratch to the surface of her eye. She called 911. A recording told her all lines were busy. She called again. Busy. On her third try, she got through and, hysterical, could scream only their location.
Church and Brambleton. Church and Brambleton. Church and Brambleton.
It happened four blocks from where they work, here at The Virginian-Pilot.
Two weeks have passed since reporters Dave Forster and Marjon Rostami - friends to me and many others at the newspaper - were attacked on a Saturday night as they drove home from a show at the Attucks Theatre. They had stopped at a red light, in a crowd of at least 100 young people walking on the sidewalk. Rostami locked her car door. Someone threw a rock at her window. Forster got out to confront the rock-thrower, and that's when the beating began.
Neither suffered grave injuries, but both were out of work for a week. Forster's torso ached from blows to his ribs, and he retained a thumb-sized bump on his head. Rostami fears to be alone in her home. Forster wishes he'd stayed in the car.
Many stories that begin this way end much worse. Another colleague recently wrote about the final defendant to be sentenced in the beating death of 19-year-old James Robertson in East Ocean View five years ago. In that case, a swarm of gang members attacked Robertson and two friends. Robertson's friends got away and called for help; police arrived to find Robertson's stripped, swollen corpse.
Forster and Rostami's story has not, until today, appeared in this paper. The responding officer coded the incident as a simple assault, despite their assertions that at least 30 people had participated in the attack. A reporter making routine checks of police reports would see "simple assault" and, if the names were unfamiliar, would be unlikely to write about it. In this case, editors hesitated to assign a story about their own employees. Would it seem like the paper treated its employees differently from other crime victims?
More questions loomed.
Forster and Rostami wondered if the officer who answered their call treated all crime victims the same way. When Rostami, who admits she was hysterical, tried to describe what had happened, she says the officer told her to shut up and get in the car. Both said the officer did not record any names of witnesses who stopped to help. Rostami said the officer told them the attackers were "probably juveniles anyway. What are we going to do? Find their parents and tell them?"
The officer pointed to public housing in the area and said large groups of teenagers look for trouble on the weekends. "It's what they do," he told Forster.
Could that be true? Could violent mobs of teens be so commonplace in Norfolk that police and victims have no recourse?
Police spokesman Chris Amos said officers often respond to reports of crowds fighting; sirens are usually enough to disperse the group. On that night, he said, a report of gunfire in a nearby neighborhood prompted the officer to decide getting Forster and Rostami off the street quickly made more sense than remaining at the intersection. The officer gave them his card and told them to call later to file a report.
The next day, Forster searched Twitter for mention of the attack.
One post chilled him.
"I feel for the white man who got beat up at the light," wrote one person.
"I don't," wrote another, indicating laughter. "(do it for trayvon martin)"
Trayvon Martin, an unarmed black teen, died after being shot by a community watch captain with white and Hispanic parents, George Zimmerman, in Florida.
Forster and Rostami, both white, suffered a beating at the hands of a crowd of black teenagers.
Was either case racially motivated? Were Forster and Rostami beaten in some kind of warped, vigilante retribution for a killing 750 miles away, a person none of them knew? Was it just bombast? Is a beating funny, ever?
Here's why their story is in the paper today. We cannot allow such callousness to continue unremarked, from the irrational, senseless teenagers who attacked two people just trying to go home, from the police officer whose conduct may have been typical but certainly seems cold, from the tweeting nitwits who think beating a man in Norfolk will change the death of Trayvon Martin.
How can we change it if we don't know about it? How can we make it better if we look away?
Are we really no better than this?
Michelle Washington is a columnist for The Virginian-Pilot. Email: michelle.washington@pilotonline.com

- GLSC Team
Posted by Great Lake Survival at 6:54 AM

Email ThisBlogThis!Share to TwitterShare to FacebookShare to Pinterest
Labels: Self Defense Topics