So let me get this straight 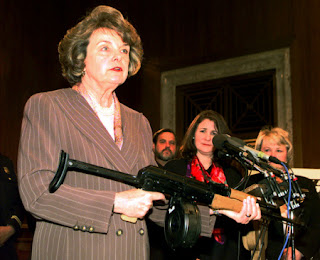 I am to relinquish my unalienable rights to self defense supposedly for the greater good of the United States, because of the recommendation of an administration that doesn't know the first rule of gun safety is to treat every gun as though it is loaded (because they don't have to know firearm safety and protect themselves, they have paid ARMED guards unlike the rest of us common folk) .

And as the picture of Dianne Feinstein so incorrectly demonstrates above, the first rule of gun safety leads to the next rule: KEEP YOUR FINGER OFF THE TRIGGER UNTIL YOU ARE READY TO FIRE YOUR WEAPON!

(Oh, I keep forgeting, this recommendation also comes from an administration that was caught running guns to criminals) .

Sarcasm On: Hmmm yeah, I'll take Feinstein's thoughts to heart . . . . I'm sure she know the first thing about responsible gun ownership. Sarcasm Off.

Feinstein and her ilk are trying to put the final nail in the coffin of American Liberty.  As though the recent consumer sell out of ammo, mags and firearms is not response enough . . . maybe we should write our Congressmen and Senators and tell them what we think.