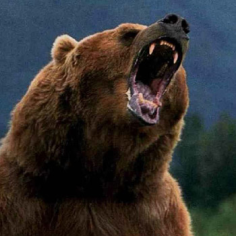 As an adult human, it's natural to want to protect yourself and your family in the wilderness.  If you realize that wilderness is a beautiful but potentially dangerous place, you obviously have common sense.  When frequenting areas that have critters such as cougars, bears, wolves or hogs, you might (insert "should" instead of "might") carry at least a powerful handgun for protection.

Below is an article written by Tim Sundles on the topic of "Stopping bears with a handgun".  It's a true "been there, done that" look at what it takes to put down a dangerous animal in the wild.  Some of what he has to say may surprise you.  In the age of information, where internet forums are full of tall tales, it's nice to go to a place like www.buffalobore.com for your ammo purchases and recommendations.  Rest assured that this guy knows his stuff.  We believe in his products because we've used them.

We also recommend that you read his article on preparedness in relation to the ammo shortages we've had this year.

From his writings, Tim Sundles seems be a Patriot who understands the problems facing American Freedoms today.  We appreciate business owners who not only have an excellent product but who are not afraid to stand up for American Liberty and say what needs to be said.  So if you want some great ammo, take a trip over to Buffalo Bore and support an American business.  Chances are you've probably already heard of them.

“Stopping” bears with handgun or rifle cartridges - By Tim Sundles

I get asked about this OFTEN. Having killed dozens of bear and guided hunters for dozens more, I have firsthand knowledge. Additionally, I have been hanging around bear guides all my adult life and between us, we’ve seen over a thousand bears killed. We have come to some consensus on the best tools and methods of killing bears with guns.

First, not all bears are the same. Grizzly bears have a much different mindset than the black bears species. To stop a grizzly attack, you will PROBABLY have to kill it, but sometimes all you have to do is to hurt it badly and the bear will become dissuaded. So, when planning to stop grizzly attacks, it is best to use a cartridge that will kill it—the quicker the better. Interior grizzlies normally get no bigger than 500 lbs, but in Montana, I’ve seen interior bears around 900 lbs., but this is very rare.  Coastal grizzlies, sometimes known as Alaskan Brown Bears, often exceed 1000 lbs. If you are relying on shoulder or heart/lung shots to kill such a bear, it takes a lot of cartridge. One that will make a big hole that goes very deeply through bone and into internal organs. If you hit him fatally in the chest area, you will then have roughly 15 to 30 seconds to stay alive before the bear learns he is dead.  If you are relying on brain shots, it is not all that hard to kill adult grizzly bears. Almost any center fire cartridge of 357 bore or larger with a very hard non-expanding, flat nosed bullet will pierce a bears skull with direct /frontal (between the eyes) hits. From the side angle, shoot them right at the bottom of the ear canal. These two shots are instant death, if you are using correct ammo. The old MYTH that bullets will slide off a bear’s skull is pure hogwash, when using modern ammo featuring bullets that will not mushroom when fired out of a powerful handgun. When using high powered rifles, it is OK if the bullet mushrooms as the high velocity of the rifle bullet, will puncture the bears skull regardless, because of its high velocity. 150 years ago, when the early settlers were heading west, the muzzle loaders they used, fired pure lead (very soft) round balls that would or could flatten out against bone and possibly slide off, leaving only a surface wound, when hitting a bears head. Unless you are using pure lead bullets that are rounded, this situation is no longer a concern.

Black bears are very different mentally, than grizzly bears. Black bears come in red, brown, blonde, and black color phases, but they are all black bear species and should be considered “black bears” regardless of color phase. While black bears have much the same physical qualities (normally smaller) of grizzly bears, they GENERALLY have a much different mindset.
To stop black bears, all you have to do is hurt them; you do not need to kill them. Almost any center fire handgun cartridge will dissuade a black bear if you hit them well with it. The more powerful the cartridge, the more damage you’ll potentially do to the bear, but nearly any black bear will turn tail if he is hit with a cartridge such as good stiff 9mm load. I know this argues against prevailing wisdom, but prevailing wisdom is based mostly on speculation, not real world experience and is not really wisdom.

We make “bear loads” in smaller chamberings such as 9mm, (item 24F) 38 SPL+P, (item 20H) and 357 mag. (item 19A). We do this because a lot of people own those guns and don’t want to buy a 454 Casull or 44 mag. I would have no problem defending myself against a black bear attack (and have done so) with the proper 9mm ammo. I prefer a more powerful/bigger cartridge, but the 9MM will get it done, even on grizzlies, if you take their brain. Of course, making a brain shot under such duress, will take practice and cool nerves.

I hike, ride horses, hunt and fish in grizzly country. When relying on a handgun, I carry a 500 or 475 Linebaugh with heavy hard cast, flat nosed bullets. It hammers grizzlies. Such a revolver weighs no more than a standard Ruger Black Hawk, but has the killing power of a moderately powerful rifle cartridge. I find the big heavy X frame revolvers (500 S&W and 460 S&W) too heavy for hiking in steep country all day, but they do possess incredible power. However, if I am going to carry a handgun that weighs 5+ pounds, I’d just as soon carry a 6 pound rifle chambered in 45-70 that has a longer sight radius, more power and is shoulder mounted.

If I carry a rifle in grizzly country, which I do often, I carry a lever action 45-70 for summer horse pack trips, hikes and fishing excursions. I load it with Buffalo Bore items 8A, 8B or 8C. All three of these loads flatten grizzlies. I carry a revolver chambered in 500 Linebaugh too, along with the rifle. The handgun stays on my person in a shoulder holster and the rifle stays on the horse or in camp, unless I am feeling the need to have it in my hands, which does and has happened and has kept me from being injured/killed more than once. I have used both revolvers and rifles on bears, several times. When I elk hunt in grizzly country, I normally use a 338 Win. Mag. With proper ammo, the 338 Win Mag. is a decisive grizzly stopper. See our items 52A, 52B and 52D, (which will be released before summer 2012) for this application.

There are many in our society who believe the life of an animal has equal or greater value than that of a human. I disagree. A bear is a wild animal, that when not threatening human life, is a wonderful sight. However, when I encounter bears that act aggressively by popping their teeth, woofing, swinging their head from side to side, charging, etc. I shoot them. I do not give them a prolonged chance to kill my wife, children, myself or any one that is with me. When I encounter bears (which I do several times per year) that run at my sight or smell, they are safe from me because I know I am safe from them. When they show aggression to humans, it is irresponsible to let them live as they will eventually permanently harm or kill someone. I don’t care that our governmental wild life agencies are protecting bears. They are generally misguided in this tactic. The notion that bears are a spiritual, magical life form that has value over human life, is a point of view that not only comes from the typical tree hugger groups/mindset, but it is coming from various fish and game agencies, more and more often. I choose to protect human life over animal life, period.  The notion that bears were here before us and therefore have rights to maul us, is not only untrue, but even if it was true, I am here NOW and assert my right to be so.

Bear aggression and attacks are far more common that most fish and game agencies want to report. In 2011, in Montana, there were seven REPORTED grizzly attacks on humans. Some of them were fatal to the human. Others simply mauled the human, who recovered from injuries. There were doubtless more attacks, but they happened to capable and prepared individuals who simply killed the bear and walked away, never wanting the problems that come with reporting the incident to “authorities”. I’ve had more scrapes with black bears than I have with grizzlies, but that is probably because there are a lot more black bears in the woods. Do not let yourself be misled by fish and game agencies that claim “black bears are not dangerous” or likewise about grizzlies. There is no need to be afraid of bears, but there is great reason to be informed and prepared. For those who don’t feel the need to be prepared in bear country, that is your right, but what about your obligation to protect your loved ones and others who rely on you? Every time I see an interview with a wild life official explaining away a recent fatal bear attack, they ALWAYS say something to the effect of “such bear attacks are extremely rare bla, bla, bla”. Truth is that bear attacks are not all that rare if you spend time in bear country and even if such attacks were rare, the person that has just experienced one, had a 100% chance of being attacked, no?
Posted by Great Lake Survival at 12:29 PM