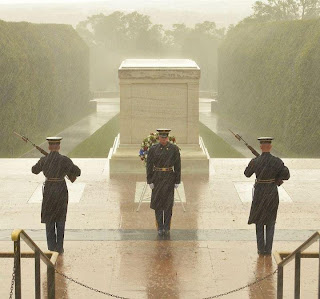 This photo was taken this morning at the tomb of the unknown soldier.

In 2003 as Hurricane Isabelle was approaching Washington , DC, our
US Senate/House took 2 days off with anticipation of the storm. On the ABC
evening news, it was reported that because of the dangers from the
hurricane, the military members assigned the duty of guarding the Tomb of the Unknown Soldier were given permission to suspend the assignment. They respectfully declined the offer, "No way, Sir!" Soaked to the skin, marching in the pelting rain of a tropical storm, they said that guarding the Tomb was not just an assignment, it was the highest honor that can be afforded to a service person. The tomb has been patrolled continuously, 24/7.
"The 3rd Infantry Regiment posted these pictures to their Facebook page showing the guards hard at work on Monday. Along with the pictures, they posted this message: 'The Sentinels at the Tomb of the Unknown Soldier maintain their vigil even as Hurricane Sandy bears down on the Eastern Seaboard. The Old Guard has guarded the tomb every minute of every day since April 6, 1948. Today will be no exception.' "
﻿
Posted by Great Lake Survival at 5:32 AM

Email ThisBlogThis!Share to TwitterShare to FacebookShare to Pinterest
Labels: Misc